2.    Other hobbies or passions except cosplay ?

3.    Are you going to local conventions ? And international ones ?

4.    Most cosplayers are making their costumes themselves, you too ?

I do yes, or i do buy small stuff and customise them for a costume sometimes.

6.    Some costumes looks heavy or hard to be in, did you ever had to wear such problematic costume ?

The first costume i made was Ahri from LoL and the tails were so big and it was awkward walking through a convention wearing them!!! Also when i cosplayed Soraka i wore heeless shoes and they got really really sore and uncomfortable and i had to wear them all day, i wanted to cry.

Jinx because its probably my signature costume, but i really love Ahri too.

I usually keep them.

9.    Making a costume requires some skills like sewing. But other skills are needed to make a weapon for example. How do you do your stuff ?

I use different types of foam to make my props and weapons, it is mostly just trial and error but its fun!

I used to buy all my costumes online, until 2012. So no, i dont find anything wrong with it.

11.    Cosplay requires a lot of time. Is it hard to combine it with everyday life (job, studiesÖ) ?

Yeah, i usually end up rushing my costumes last minute because im too busy to do it .any other time... or too lazy! Its fun though, so i always try to make sure i keep at it, because its such a good experience in life and really helps me with skills.

I dont really watch anime or read manga anymore, since around 2012/13 but i really love sword art online series 1.

I like PC! My favourite game is League of Legends, duh!

17.    Is your boyfriend/girlfriend jealous or upset when you wear sexy outfits for cosplay ?

I dont have a boyfriend.

19.    Ever encounter problems with other cosplayers (jealousy for ex) ?

Not really, a few cosplayers have had a problem with me but every cosplayer gets hate from someone so i try to ignore any i get and use it to make me a better person. For every person who doesnt agree with something i do theres thousands of my fans who do! 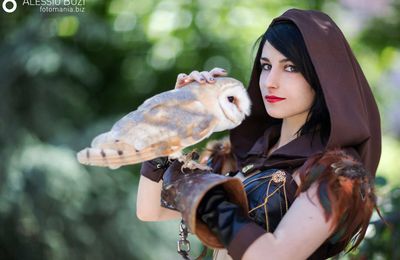